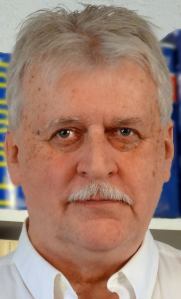 I was born in 1946 in Ottawa, Canada’s capital, but my dad was in the army and by the time I was about seven we had become a mobile family. Our first posting was Germany. From that point on the place I would call home changed every few years. The upside is that I think I’ve become very adaptable to new situations and interested in other cultures. I’ve lived coast to coast in my own country and lived briefly in Holland and Mexico. The downside is that I have almost no memory of childhood friends, teachers, schools and so on.

I started working very young as a newspaperman, which I loved because it afforded a chance to meet people from all walks of life. Doing something different every day, and the deadlines, were exciting. That led to the world of magazines, where I worked for years on staff or as a freelance writer and editor. Magazine writing gave me much more leeway to develop my writing than newspapers, and I worked with some superb editors, one of whom ended up editing my current novel so many years later. Since 1968, I’ve called Montreal home. I fell in love with the city when I was a young man. Although I’ve moved around a number of times since then, it’s the only city I ever truly feel homesick for. I’m the father of two grown daughters, both (happily for me) still living in Montreal. I also have a younger brother.

I’m someone who needs a lot of time alone. While I probably fit an introvert’s profile, I am actually quite sociable. I often have to be dragged out of my place kicking and screaming but I love meeting and talking to people. However, I’m not at all comfortable in large groups. I heartily dislike most parties but love being at a dinner table with a small group of family or friends. Most of all I love talking to people one-on-one.

While I can appreciate nature’s wonders, especially the sea, I am overwhelmingly a city person. I want to look out my window and see lots of people. I like crowded streets and subways. I’m a people watcher and an eavesdropper, which is why I don’t clamp on earphones when I’m out.

Whether as a newspaperman, magazine writer, advertising copywriter or translator, I’ve almost always made my living with words. I simply like writing… anything. I’ve also kept a journal since the 1970s. It’s as if I don’t believe anything is real until I write it down. When people still wrote letters, I wrote long ones. I’ve wanted to write a novel since I was an adolescent, and I’ve often had a novel in the works while earning my living doing other things. The novel I published recently is the only one I liked enough to publish, but the important thing is that from the time I started writing it to the day my first draft was done, I never once thought of publishing it. I was writing because I love writing scenes, scenes based on things that have either struck me emotionally — imagined, dreamed about, witessed, read about — or seemed strangely out of place or incongrous or just incomplete, scenes that beg to be flushed out. Sometimes a painting draws me in and I don’t know why. I want to imagine where it is trying to take me.

I find the destinations, explanations and connections the imagination provides to be as close to magic as I’ll ever get. I tell myself in the morning that all I have to do to enjoy that magic is to put my fingers on the keyboard. Some days nothing happens, but at other times I find a whole day has gone by and there is something on my screen that never existed before. I do that sort of writng for my pleasure. I think about novels now and then, and I do sometimes find myself saying “Yes, that (fill in the blanks) might be worth a novel.” But nowadays I mostly just start writing scenes to see where they will take me. I think inspiration comes from making yourself open to the creative side of your being and being willing to accept and flow with whatever “reality” it presents. If there were no surprises I wouldn’t do it.

“he & She” is about a middle-aged man who realizes his life has ended up as nothing. He is alone, he has a booze problem, his relationships have withered away, he is afraid of the final years of his life. He feels he has nothing to look forward to, but at the same time nothing to lose. Above all, he feels dead sexually. He tells himself his sexuality is only real barometer of being. By chance, he sees a photo of a young woman on the Internet. He is transfixed. Only later does he notice she is a dominatrix. In his desperation about what’s left of his life, he makes a decision that ends up transforming it.  If I may I’d like to quote an excerpt from a review that I think gives a pretty good picture of the book:

5. You recently attended the 2014 Readers Favorite Award Ceremony in Miami. Tell about this!

What can I say right now other than stating that I’m answering your question in late January, the coldest month of the year in Montreal? Speaking seriously, the warmth I felt when meeting so many wonderful writers at the ceremony had nothing to do with temperature and palm trees. I said above that I am very uncomfortable in large groups and I admit to having had reservations about what the experience of being surrounded by hundreds of writers would be like. But that apprehension evaporated on Day 1, even before I had a drink. What made Miami rewarding was that it was a culmination of something else, namely the group created for us on Facebook where we got to know each other online for months before the awards 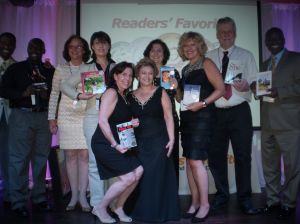 ceremony. Meeting one another face-to-face seemed only natural. As for the awards we received there, I think they had the effect of telling us someone has noticed — and valued — what we spent so much time creating. If it were not for that award, I believe there would be days when I would find myself sitting alone at home trying to assure myself that I really did publish that novel. It’s a cliché but writing is indeed a lonely profession. Hearing now and then from friends I made in Miami reminds me that I’m not alone.

I didn’t believe it when I first read it, but it’s true: marketing your book takes as much time and energy as writing it. My book was published in late October 2013, but I’m still very busy learning the ropes of life post publication. As for another book, I can’t say I’m actively planning one but I can say I’m toying with two ideas. One is resurrecting an idea I worked on many years ago for a totally different kind of book, a novel set in New France in the 17th or 18th century. I researched that idea for several years. Because I wrote he & She without an outline, I’m starting to think the reason I didn’t write the historical novel was that I had too much research. Boxes full of it. It froze me. The other idea I’m tossing around is a new one, and I never talk to anyone about those ideas until I’ve actually started writing. Even then I tend to keep my mouth shout, not because I’m particularly secretive by nature but because once I talk out a story that’s percolating in my head it dies. There’s nothing more to create. That’s advice I would give any writer: Don’t talk about it, write it.

I’ve always loved reading, although I stopped reading fiction while I was writing he & She. I’ve gone back to it but I spend far

fewer hours doing so, partly because of vision problems.  I love music. I play alto sax and flute. I stopped playing the horn for decades because you always worry about neighbors. However I took it up again seven or eight years ago and found out my neighbors don’t mind. I always used to play classical on flute but now I play the sax almost exclusively to explore my other love, jazz and blues. I’m a lousy musician but I find playing sax the greatest way to shut off my mind. I find great release in it.

Readers can find out more about Wayne Clark and his book at his author website: http://www.wayne-clark.com/